Ten Tips to a Sleeping Babe

I feel like every time I get on Instagram a mama friend, or blogger I follow is sharing a picture of their too cute babe with a caption about how they aren’t sleeping. Whether it’s teeth, or being a newborn, or just…dare I say, being a baby.

GOSH THAT FEELS GOOD TO SAY.

In all honesty, I’ve almost been afraid to say that online. Thinking I had some miracle sleeping child. Maybe I do. Maybe it’s just being really blessed. Or lucky. Or good juju. Whatever it is. I’m thankful.

I 100% do not claim to be a sleep expert. By any means. But. I’ve come up with a couple tips to get that babe sleeping. They might work, they may very well not work.

#1. Feed that baby.
Ok, I know this sounds stupid. But. At around a month old we started to give Em formula at night (I think it was like 4 oz). It was usually around midnight and she slept through the night for six hours. And continued to do so.
Here’s what needs to be said. Sometimes your breast milk isn’t enough.
GOSH. THAT feels good to say too.
Mine wasn’t and I knew that. Giving her formula filled her up for night time and ensured a good nights sleep. Now. If you’re milk is enough. Way to go mama! I’m jealous.

#2. Give the swaddling  a rest.
News flash: some babies hate to be swaddled. Case in point, Emily. We got away with it for a couple weeks when she was a newborn, but unless we put her in a suit thing, she busted right out. My mom told me one time, “They’ve been cramped up for nine months, who wants to be squished all the time when they can finally move those limbs”. Point taken, mother. I do think that the first couple weeks works, but once Em became more aware of things it was a no go. So don’t think you have to swaddle your babe just because the book tells you too.

#3. Put baby on their belly.
I know. I know. I KNOW. This isn’t what they tell you to do. But this was our lifesaver. Once Em could move her head back and forth and up and down, which was about a month, we put her on her belly to sleep. The problem was that our little wiggle worm didn’t like to be swaddled, but then would wake herself up from moving her arms and legs.
I’ll be 100% honest with you and tell you it scared the crap out of me. And I lost a lot of sleep those first couple of days checking on her every ten minutes. But the first night we did it she slept for almost nine hours, and was a little over a month old.
Side note. You were probably put on your belly to sleep too. GASP.

#4. Get a noise machine.
I always remembered my sister had one for my niece and after reading (very little) about it, decided it was a good call. Babies are used to noise from being in the womb, so why stop that when they get out?

#5. Created a schedule as early as possible.
Some people seriously disagree with this one. Thinking that babies don’t know whats going on until 5-6 months old, so creating a schedule is useless.
Nay.
Babies are fully aware of night and day time. Yes, when Em was a new born she got her “night time bottle” at midnight, but eventually we worked that earlier and earlier and now we’re on a serious schedule. Which is sanity to me. If you get a solid 4 hours from your babe, make that four hours make sense. 2-6. 1-5. 3-7. Start early with a schedule, and stick to it!

#6. Create a nighttime routine.
This grew as Emily did. When she was a newborn, there wasn’t really the process of getting into jammies or a bath. But now that she’s older it’s just about the same thing every night. A bath, into jammies, and sometimes Sesame Street depending how long we have. We’ve created a really tight schedule with her so bed time is a hard 7 these days. And I don’t under any circumstances let that change. We plan our days around this 7:00 bedtime. If we go out to dinner, we go out earlier now. The littlest things can throw a baby off from a schedule. So I don’t even want to try and see what happens if we did.

#7. Make day time light and night time dark.
I feel like this might be a no brainer but I guess it’s not. During the day, when baby is awake, open the blinds. Use natural light. When it’s night time, turn some lights off. Create a setting that allows for sleep.

#8. Let them cry.
Again, I know. I KNOW. This isn’t popular. And quite honestly it sucks. Em does this for naps a lot. But. It’s worked for us. We’ve let her cry for a good 20 minutes before and out she goes. You’re the mama, you know a tired baby when you see one. Sometimes during the day for her naps, I just have to put her in her crib and walk out. Most of the time she talks to herself for a couple minutes, sometimes she cries. But she always falls asleep.

#9. Do what works for YOU.
Which may not be a single thing I’ve said. Or your mom says. Or that stupid baby book. I know women who have EIGHT MONTH OLDS that still don’t sleep more than 4 hours at a time. To that woman I say, I’m praying for you. Because I would loose my mind. If having that babe sleep with you works, go for it. If they keep waking up, maybe you should move them into their own bed…and room. If making sure the fan, noise machine, and clock ticking is what makes them sleep, go for it.

#10. NEVER WAKE A SLEEPING BABY. NO MATTER WHAT
Again. I start this off by saying that I feel like this is a no brainer. But evidently it’s not. I was given advice more than once to wake Em up to feed her or change her because she slept so long at such a young age. NO FREAKING WAY, MAN. If your baby is hungry…they’ll wake up. Even at the hospital the first night the nurse didn’t wake her up to feed her. I promise your baby won’t starve. Cross my heart. When I hear women say they wake their babies up to feed them I want to shake them. STOP DOING THAT. Seriously. And if your baby sleeps so long through the night like Em does, start them in night time diapers earlier on.

I put that one in all bold because it’s so important.

Sleep is just as important for you as it is for them.

If you’re reading this and think I’m full of crap. I have absolutely no problem with that. If you think some of these might help, then yay!

But this worked for me. And this is the face I get every time this kid wakes up: 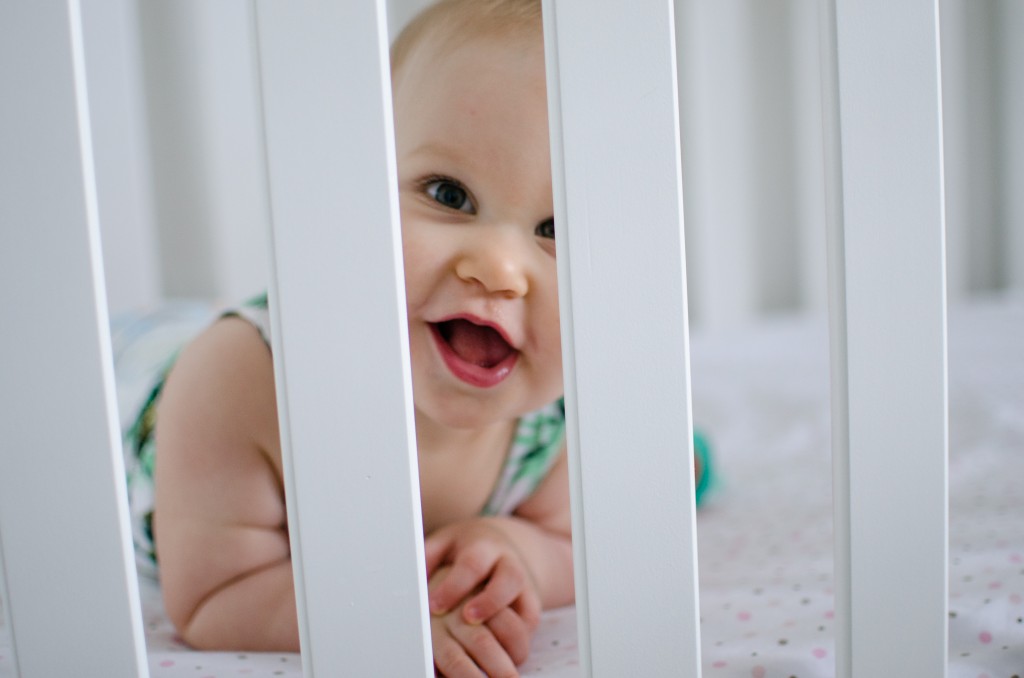 And if you have any other suggestions, let me know!
Here’s to sleeping children!

I am not defined by the number on my jeans.