Like any true life mama, Em is officially seven months as I write this…but oh well.

I say this every day, but as the months go by each one is my favorite. She’s becoming such a little human, with a distint personality, and I fall more and more in love with her every day.

How she’s half a year old already, I have no idea.

+Em rolled over for the first time on her 6 month birthday! Oddly enough, it was from her belly to her back…not the normal back to belly most babies do. She’s just that talented. For a couple days after all she did was roll, roll, roll. She figured out her new talent and went to town. Such a big moment for us! Also, a “oh crap now I can’t leave her on the changing table” moment…a thought all parents go through, I swear.

+We took our first road trip to North Carolina to see Sonny’s family. The drive wasn’t as bad as I had thought it would be. I swore I wouldn’t be that parent that drove with my kid, because flying was so much easier and faster. But there I was. After hearing the perks, and suggestions to drive up during the night, so she could sleep, we did so on the way up. Gatta be honest and tell you that it was terrible. She’d sleep for a couple hours then wake up, then sleep then wake up. Not to mention mommy and daddy were total zombies the next day. So on the way back to drove during the day. Home run. It didn’t mess her night time schedule up at all.

+Em has two bottom teeth and that toothy grin is a heart melter. They came in about a week apart, but we don’t have any more yet. Teething sucks. The only thing I have found that helps with her pain is Tylenol, and the Teething Tablets. Which are a super temporary pain relief, which is why 9 times out of 10 I give her Tylenol. #ibelieveinmodernmedicine

+We’re on three meals a day. Fruit for breakfast, and then some sort of veggie combo for lunch and dinner. She loves squash, carrots, green beans, and pears. She eats anything we put in front of her though. Wasn’t super pumped about a chicken and brown rice dinner, but we’ll get there.

+Em is up to 18 pounds! Chunko Munko! The baby rolls are just as wonderful as I had thought they would be. I can’t get enough of her chunky thighs. She’s also 27 inches tall, at least that’s what I think the doctor said. No surprise that she’s tall, hello, look at her daddy.

+We’ve officially introduced her to March Madness and she loves it. The first Thursday the games were on I needed to get the house cleaned, so I put her in her chair in front of the tv and she watched almost a whole half of a game. One of our proudest moments as parents.

I wanted to do a photo shoot with her outside for her six months pictures, but things just always kept coming up. Life, am I right? So one day she was looking way too cute in an outfit, so I got my camera and we had a little photo shoot right in her room. She’s adorable. And chewing on her hands which is super appropriate cause that’s all she does now.

And I think that I learned a little lesson. Life is better when you just go with the flow instead of stressing about getting everything done so perfectly. This wasn’t in the outfit I bought her for her six months pictures, it wasn’t where I had planned…but it’s way better. 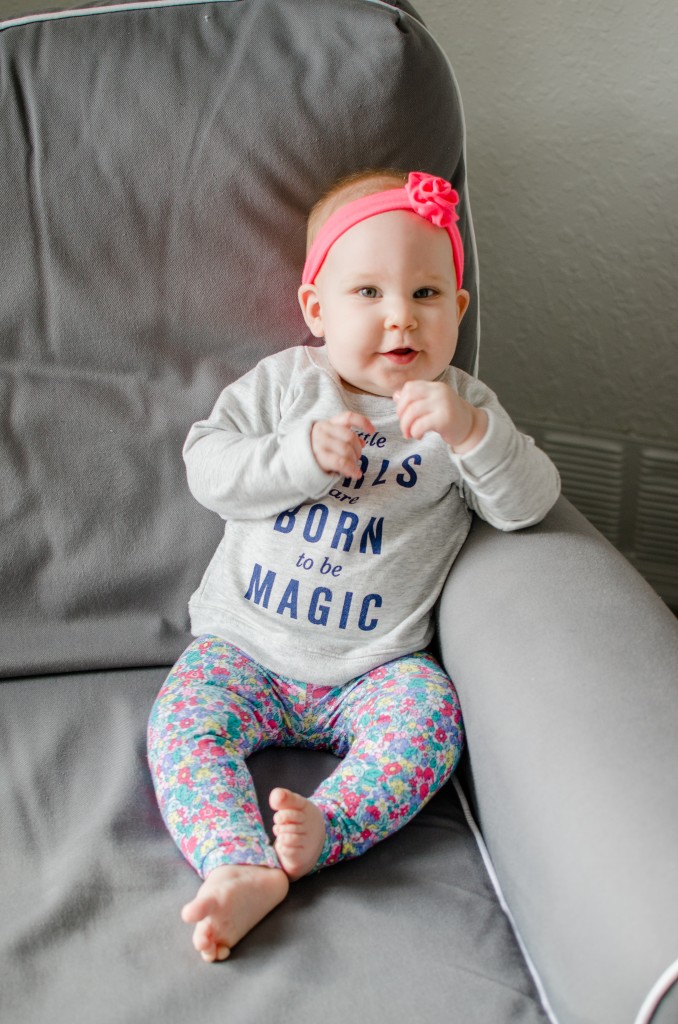 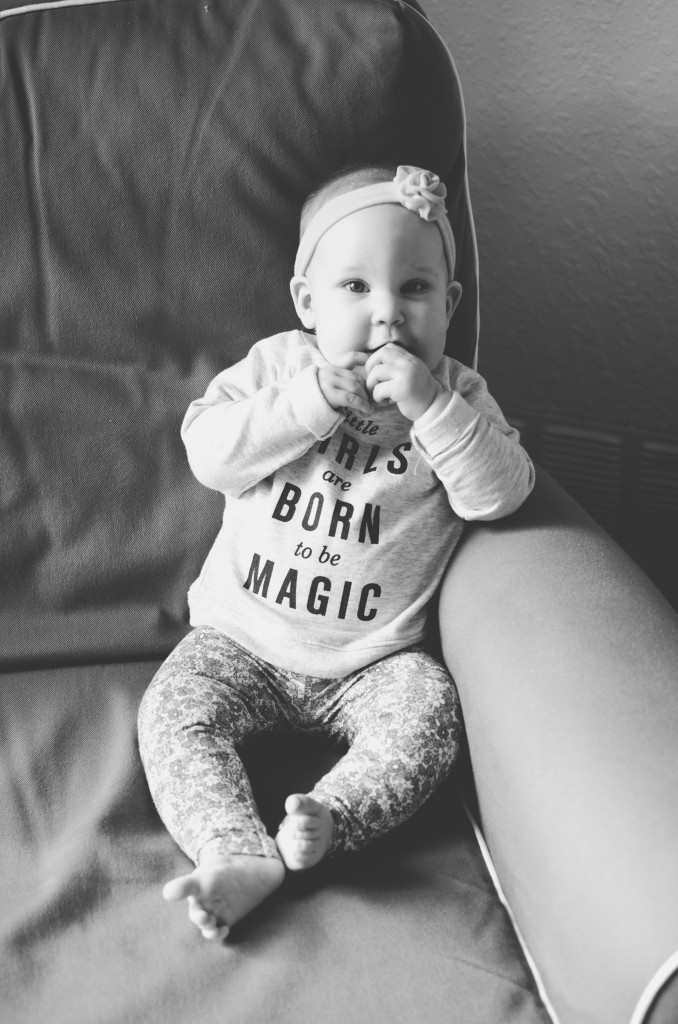 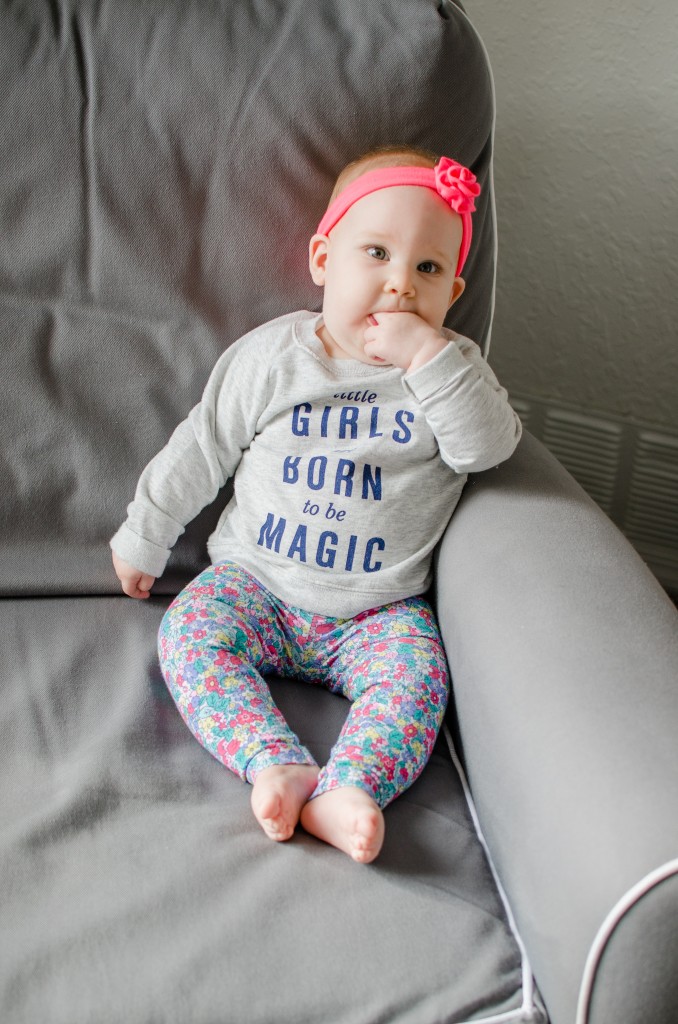 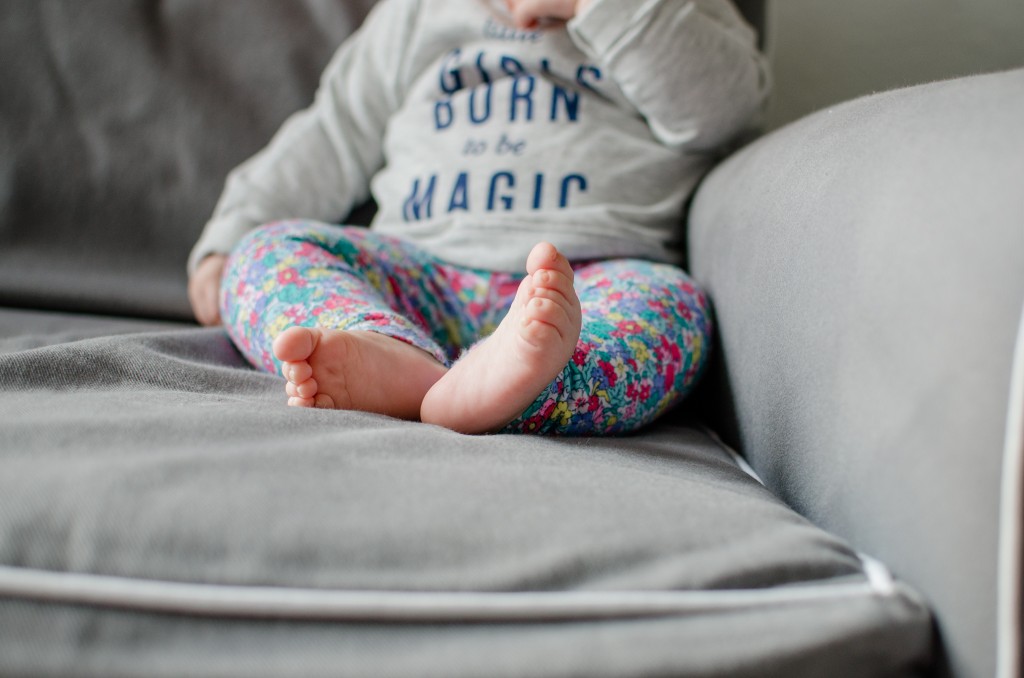 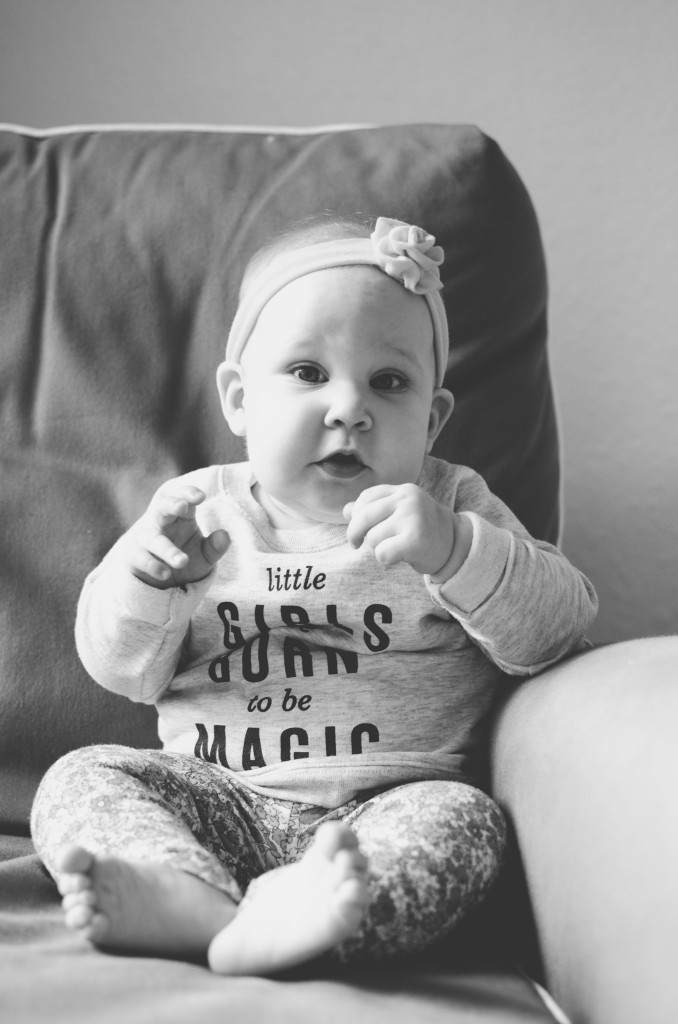 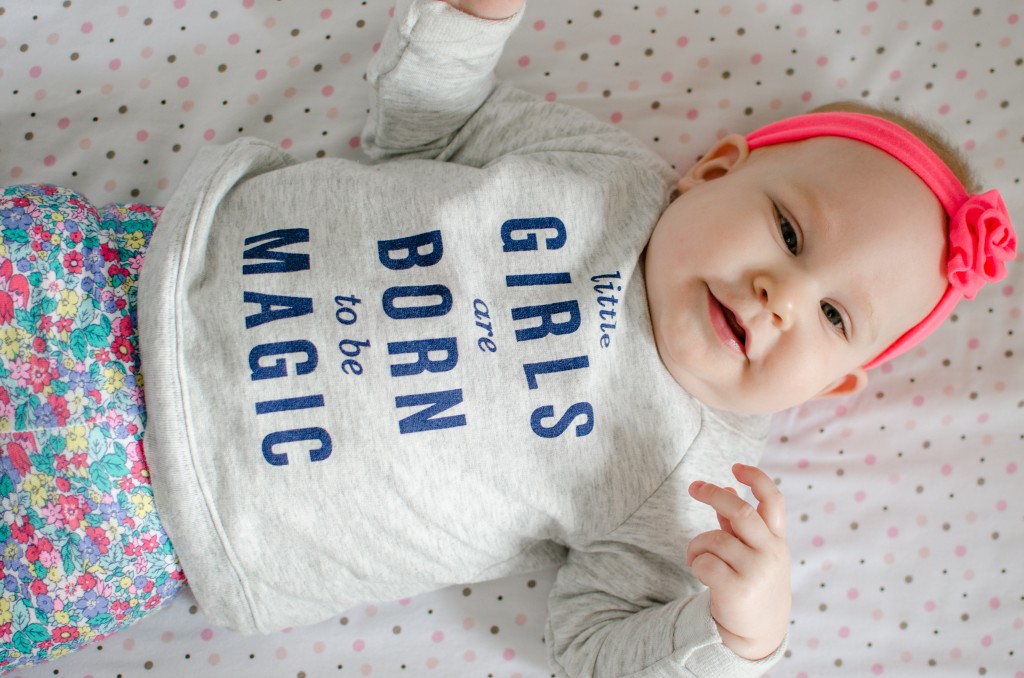 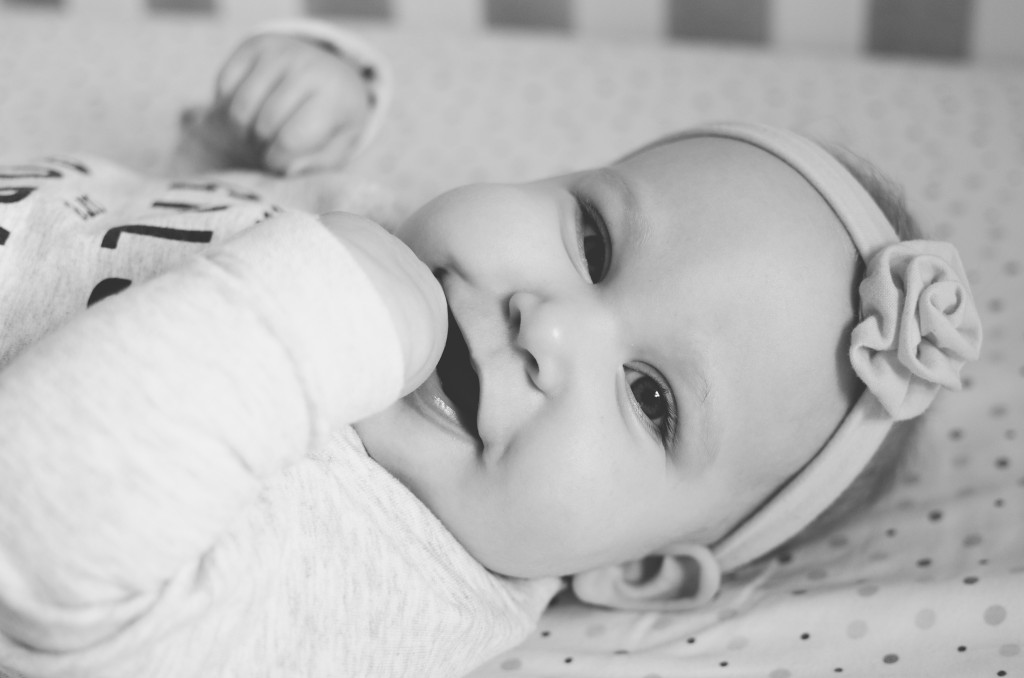 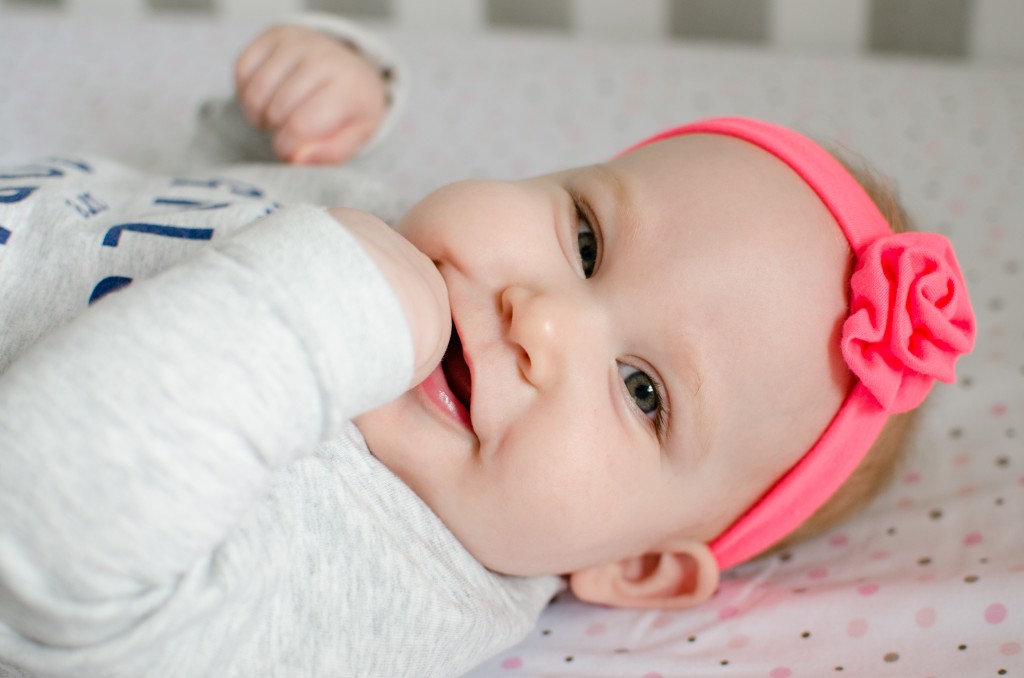 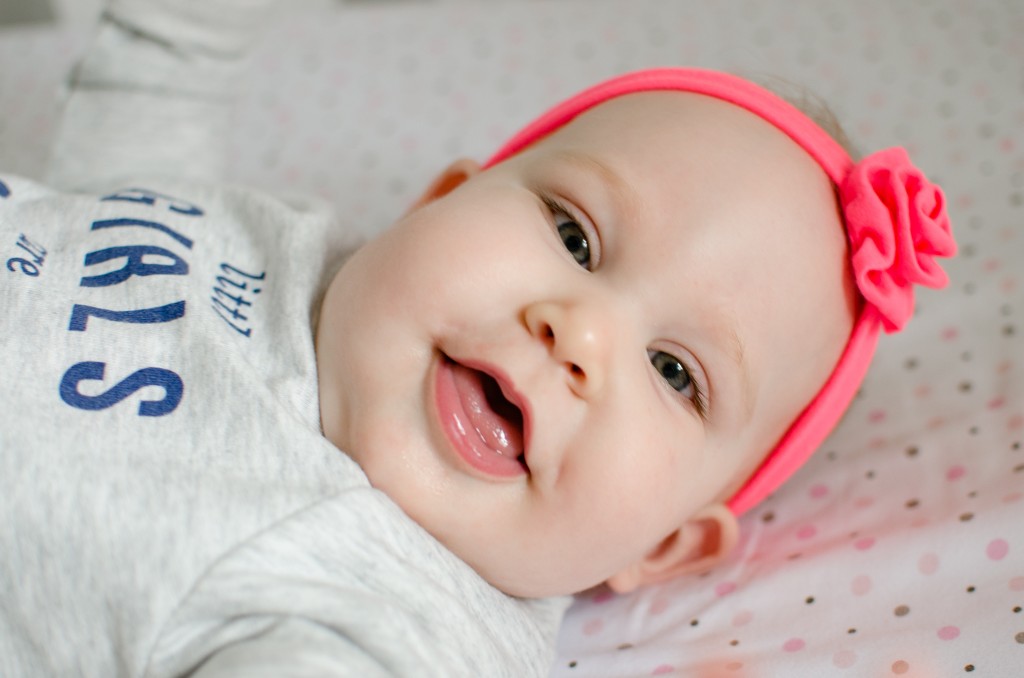 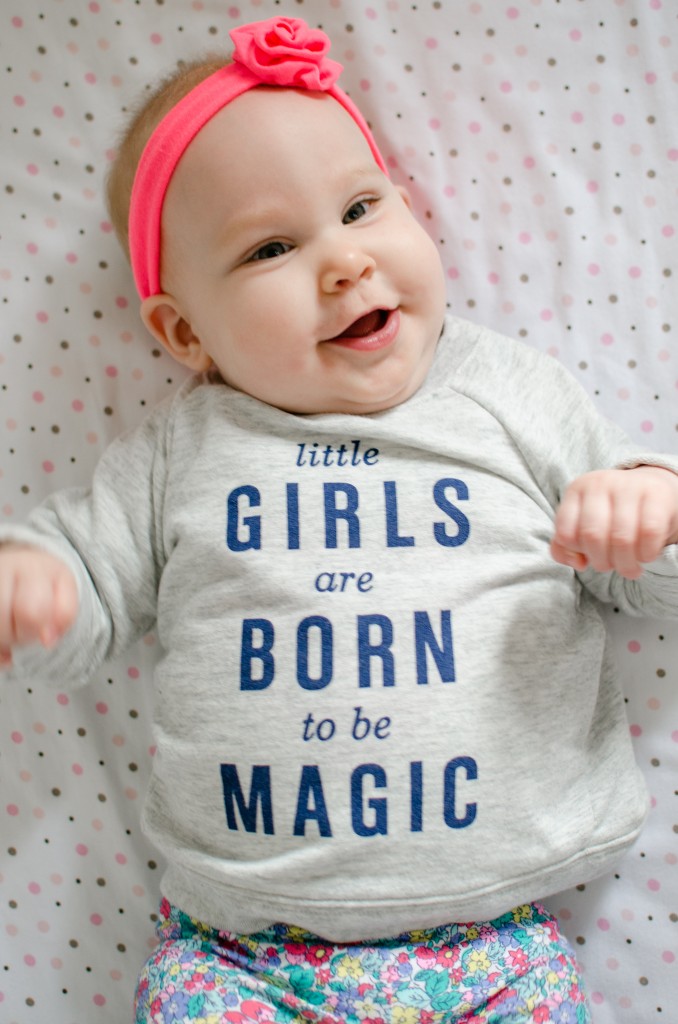 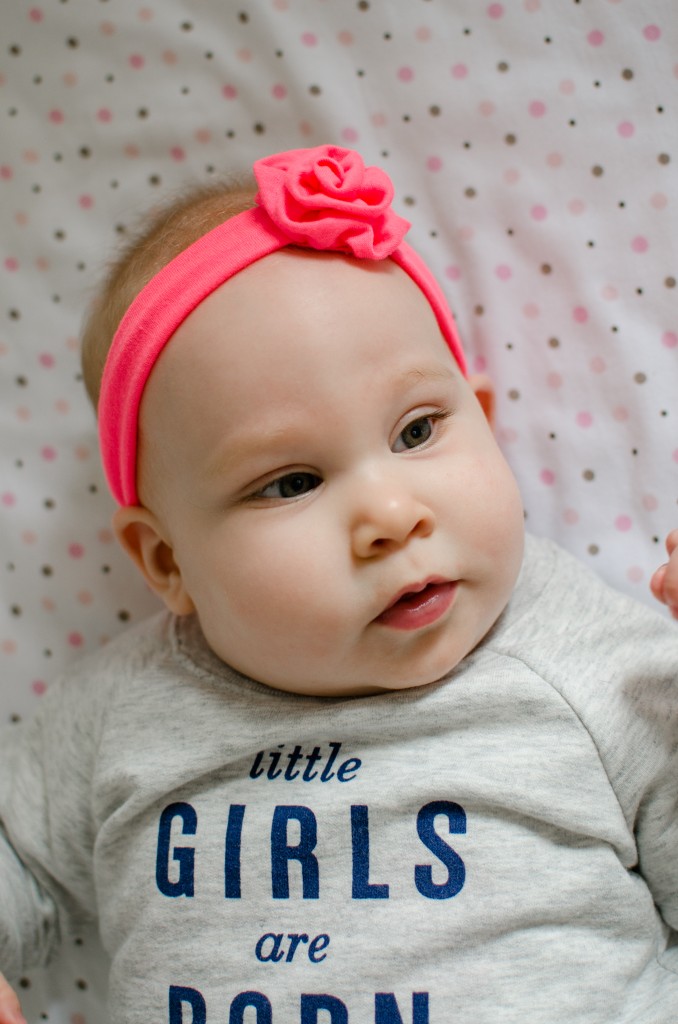 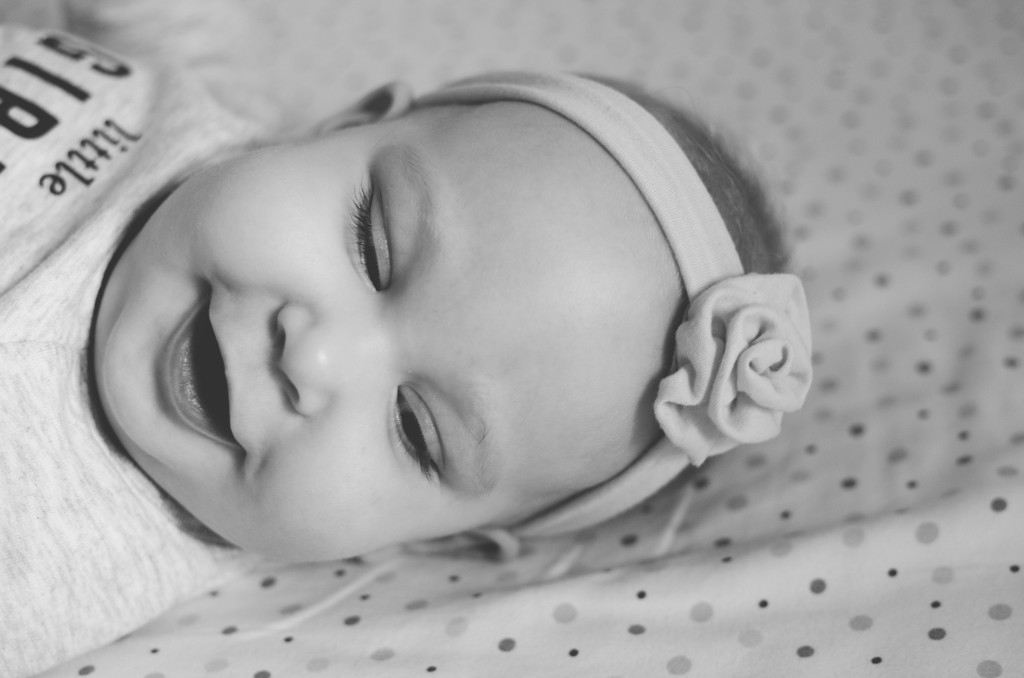