I know I can’t be the only one who thinks that waiting sucks.

There’s a lot to be waiting on. And when it comes to things that we have no control over…it sucks.
As an English major in college I’m trying to find a better word than sucks (also as a mom who can’t let her kid say that word) but I’ve got nothing. Because it’s true you guys.

I’ve been doing the She Reads Truth Romans study and came across this the other day: 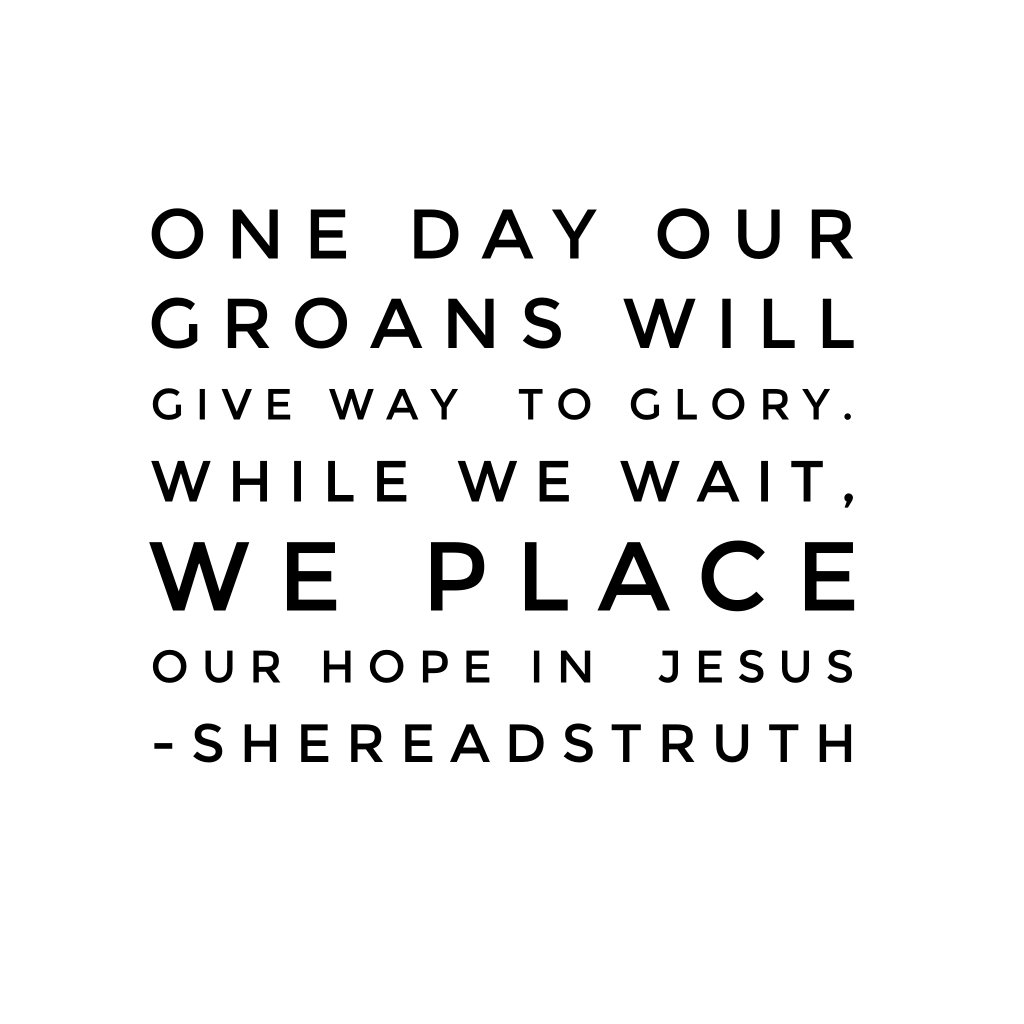 I’m not sure if you’re waiting for something, but let that all sink in.

That’s the worst part too. Seeing other people get what we want. And we’re surrounded by it every day thanks to social media. I won’t sit here and say I don’t have my days where I wallow in self pity. When I ask God, “Ok, but I’ve been really trying to get that and they weren’t. Why do they get it so easily?”

And while I haven’t heard God speak the words exactly to me, I know He’s saying, “Because that’s not what I have for you right now, Megan.”

And maybe I’m the only one who does this too, but then I start to do the, “Why can’t you just be happy with what you have?” thing with myself. Almost as if I’m asking too much right now, because what I do have is enough.

I keep reminding myself that God is a good, good Father. He sees me. He knows my heart and He knows the desires I have even before I speak them out load. Romans paints a beautiful picture of what hope in Jesus means and looks like. It’s a book I’ve read before, but this time around, it’s different. God’s cool like that.

I’m identifying so much with Paul this time around. When he grumbles about sinning (chapter 7), telling us that he wants to not sin, but does. I get that. I want to put all my trust in God, but I still try to do it all on my own. I don’t want to cry or be super envious of someone else when they get what I’ve been praying for months about…but I do. Paul tells us that we’re going to suffer.

This life with Christ, is and will never be a cake walk.

But we have this hope.

And that hope in the One true God will give us peace.

But if we hope for what we do not yet have, we wait for it patiently. -Romans 8:25

I know that Gods timing is much much better than mine. And I know that just asking and praying for what I want doensn’t mean it will happen tomorrow. My whole life I’ve always thanked God for having a plan better than mine. Looking back whenever God set me on a different path than what I had wanted it wasn’t easy. Tears were shed. My heart hurt.

He had a better plan.

So right now, I know that what I’m waiting for will happen one day. It just might not be the day I had imagined.

If you’re waiting like me, try really really hard to believe that truth. God loves us so much and He’s got us.

God made you too, mama.